What Exactly is Capital? 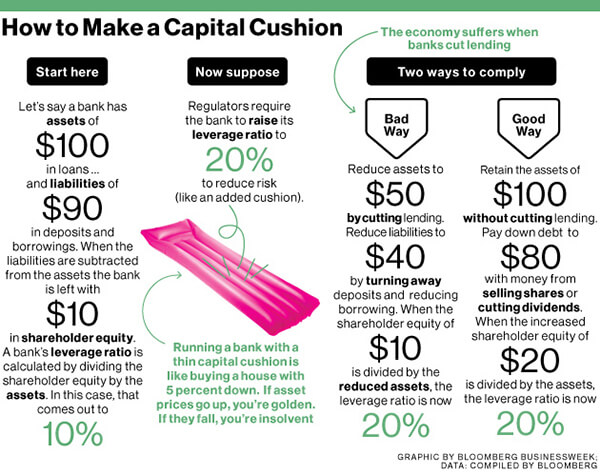 I can no longer help but post simple descriptions when I stumble upon them in periodicals I read regularly. This explanation of capital and the helpful image “How to Make a Capital Cushion” (above) come from Bloomberg Business week:

Regulators don’t want banks to go bust in the next financial crisis, or even come close. So they’re requiring them to carry thicker safety cushions of “capital,” that miraculous loss-absorbing material.

So what exactly is capital? Sometimes it’s described as a rainy-day fund, which is wrong. More often it’s characterized as something banks “hold,” which can make it sound like a pile of money that has to be set aside so it can’t be lent out for a profit. That’s not right either.

Put simply, capital is nothing more than the difference between what banks own (assets) and what they owe (liabilities). Assets include loans the bank makes, which produce interest income, along with bonds, deposits at the Fed, and cash in the vault. Liabilities are other people’s money that banks are allowed to play with, including deposits by their customers. A bank with a large capital cushion could sell its assets, return all its depositors’ money and pay off other borrowings, and have money left over.