INDEPENDENT SPONSOR STRUCTURE
The image that follows details how an independent sponsor might structure a transaction (click on the image for a larger view). In most instances the independent sponsor will contribute some capital to the partnership, largely because investors will want to know that they have “skin in the game.” The bulk of the capital, however, will come from investors and lenders. The remaining parties and entities are described below. 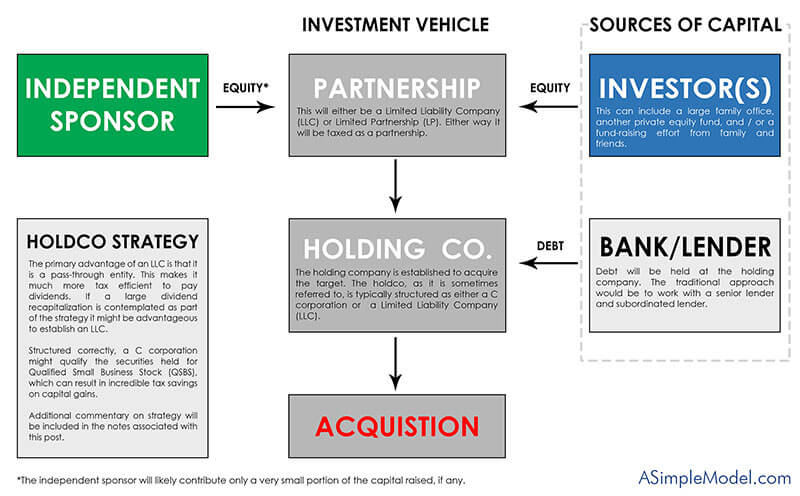 Investor(s):
Some independent sponsors will work to identify the source of their capital long before setting out to search for a business. They might, for example, approach a family office to pitch the idea of backing them before leaving their current place of employment. Others will identify the opportunity first, and then look to raise funds once they are confident with the process. Typically this would occur around the time that a Letter of Intent (LOI) is being negotiated or right after it has been executed.
Partnership:
The independent sponsor will establish a partnership agreement as either a limited liability company or limited partnership to serve as the investment vehicle for the deal. This agreement will govern how the independent sponsor and investor(s) work together.
Holding Company & Holding Company Strategy:
The independent sponsor will then establish a holding company, which will be funded in part by the partnership. Most holding companies are structured as either a C corporation or a limited liability company (LLC).
The primary advantage of a LLC or S corporation is that it is a pass-through entity. This makes it much more tax efficient to pay dividends. If a large dividend recapitalization is contemplated as part of the strategy it might be advantageous to establish a pass-through entity and avoid double taxation.
Structured correctly, a C corporation might qualify the securities held for Qualified Small Business Stock (QSBS), which can result in incredible tax savings on capital gains. For more information on this topic please see this post on QSBS.
Bank / Lender:
Debt will be held at the holding company, and a variety of funding options are available. The traditional approach would be to work with both a senior lender and subordinated lender, but an independent sponsor could also reach out to a unitranche lender. Click here for an example of a senior debt term sheet and a subordinated debt term sheet.
INDEPENDENT SPONSOR ECONOMICS
Aggregate independent sponsor compensation can be broken down into three categories. In increasing order of importance they are as follows:
For more detail on independent sponsor economics please see this link.