This article was originally published on Quora in response to the question, “What is the difference between a businessman and an entrepreneur?” It was later republished by Inc., Forbes and HuffPost. I wrote it in 2016, a few months after introducing the first subscription package on this website. In 2022 I officially left full-time employment to prioritize ASM, and I thought I would repost the article to commemorate the transition.

I moonlight as an entrepreneur, and work as an investment professional otherwise. This is not a recent arrangement, but one I have survived since November of 2012. At times my day job requires late evenings and weekends at the office, and when it does not, my startup does. To maintain both, I work a lot. Whether it will payoff is difficult to say, but it has been a terrific education.

Having spent more than a decade studying business models and interviewing entrepreneurs, I assumed a startup would come naturally to me: I was wrong. I benefited to some degree from my background in that I understood the following:

What had eluded me was that no one cares. That you want to create something wonderful is of little interest to anyone until you have, and it is this period of time that defines the difference between an industry professional and entrepreneur.

People often associate entrepreneurs with brilliance and unlimited creative faculties. There’s a certain comfort to be gained by the idea that their success is derivative of talents others lack. But it’s not true. These traits are also employed by businesses across the globe. Within the organizations that employ brilliant and / or creative individuals, talent is cultivated and rewarded. Colleagues, compensation, job reviews and promotions provide regular feedback and shine a light on success and failure. As an entrepreneur, these stimuli are lacking. Most of the time you have only your own conviction to rely on.

I believe this is why passion is also frequently listed as a primary ingredient for entrepreneurial success. Here too I disagree. For most, passion is fleeting, and few startups are good ideas if you are only prepared to commit for a period spanning less than a year. In the context of a relationship, passion is often said to require a matching reciprocal effort from both partners to persist. There is no such arrangement with a bootstrap startup. While I don’t own a cat, based on what the internet tells me about them, I believe a startup most mirrors the relationship a human can expect with this animal. You provide money, shelter and unconditional love without knowing if you will be acknowledged, clawed or briefly entertained.

So what’s the difference between a businessman and an entrepreneur? The ability to persist when no one’s watching for an extended duration. Without anyone telling you what to do or compensating you for your progress, how long will your conviction hold?

This is the question that eats at me, and I don’t even consider myself a true entrepreneur because I have maintained my day job. I imagine few variables overwhelm an entrepreneur faster than a shrinking bank account. Without another source of income an entrepreneur is forced to work relentlessly until profit is realized. I have had the luxury of avoiding this stress, and yet I still find myself staring at my ceiling from midnight to 7AM on occasion.

What I worry about most is time. As a “businessman” I know precisely what my time is worth. I can measure it twice a month via ACH deposit. I also have the aforementioned stimuli to keep me going. Compare this to the response received in the first year my website went live. I spent 6 months preparing content and recording videos, and I was certain it would be an immediate hit. The site went live on July 4th, 2013 and I announced it via social media on July 30th, 2013 (the first spike in the image below). For the remainder of the year I almost never broke 20 visits a day. 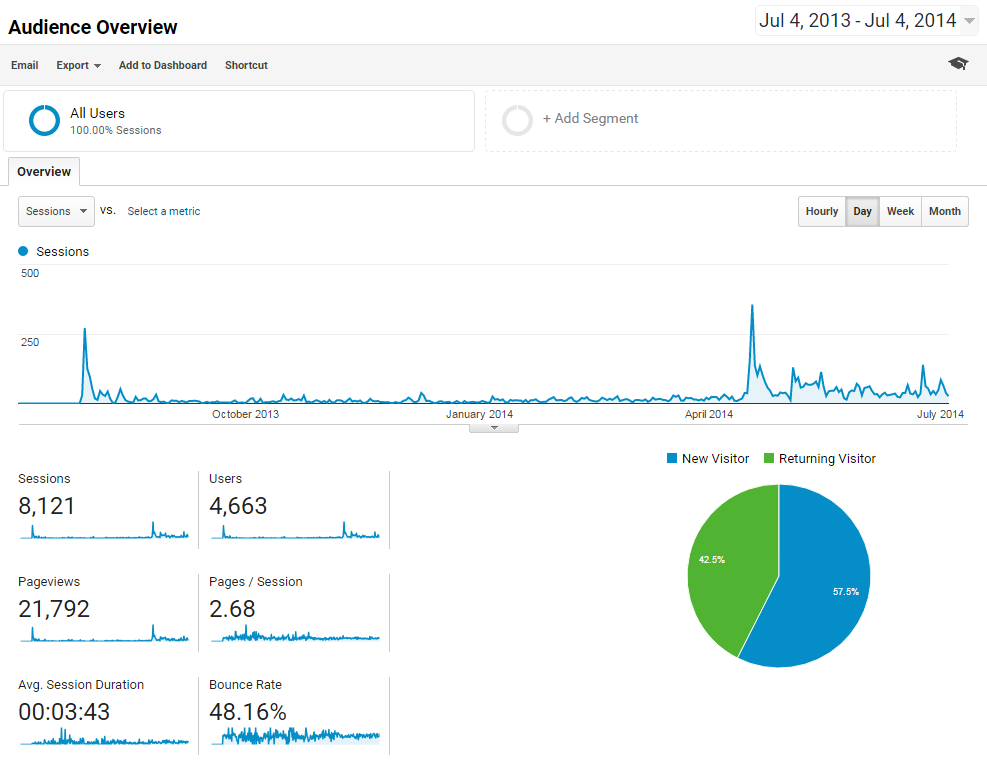 The lack of an audience and coworkers made content creation, posting and sending email notifications (the first one went to 11 people) extraordinarily difficult. I questioned my sanity with increasing frequency throughout the year. In any given month I would convince myself it was a hobby / that I was learning / that money didn’t matter / etc. And what is startling about all of these excuses, is that they would be unacceptable to a true entrepreneur. If you don’t have a source of income, convincing yourself that your current venture is a hobby or learning exercise to keep going will kill you.

The number of variables that have the potential to eliminate your resolve make the commitment required as an entrepreneur impressive. This extends beyond income to identity. I recently had a conversation with an entrepreneur who told me that his challenge in making the leap was the prestige of his former career track. He was previously a Harvard graduate that worked at Blackstone (a large private equity firm), and he left with nothing more than an idea. Before he could launch, he had to teach himself to code and then build the product. His comment was that when friends / acquaintances asked what he was working on his response was received with an “and that’s it?” look. It may not sound difficult, but consider how much easier it would have been to return to Blackstone and continue earning a substantial salary.

(Note: Fortunately it worked out for the former Blackstone employee. Towards the conclusion of our call I asked if he ever missed the scale and scope of the transactions he worked on previously and he replied without hesitation “not for a second.” It helps that I believe he now has approximately 200 employees.)

Creativity, intelligence and passion are fantastic attributes, but it’s grit that gets you there. I am not saying my website has made it. My startup remains just that. But it now has an audience that I am quite proud of (testimonials), and I believe it will turn cash flow positive in 2017 (my time excluded). If you believe you can tolerate the uncertainty, I would recommend a venture of your own. It is an illuminating experience. Just remember it doesn’t hurt to keep your day job.